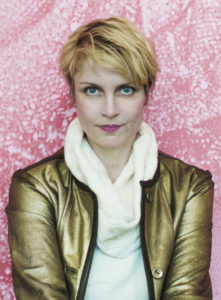 E.V. Svetova, the author of The Green Hills trilogy

Print In The Snow is a fairytale that enchants children and adults alike. What is its intended audience in your own mind?

Being a devoted J.R.R. Tolkien fan, I instinctively look to his books for inspiration and guidance. The Hobbit was intended as a children’s story, but the world and the characters developed and took on a life of their own. What grew out of the fairy tale was The Lord Of The Rings trilogy, and it’s definitely more than a bedtime story for little kids. When I started writing Print In The Snow, it was a humorous, light-hearted, almost parody-like story drawing on many of my childhood interests. As I grew, the story grew as well, and more serious elements emerged. I hope that as it stands now, Print In The Snow has something for both young and grown-up readers, just like The Hobbit had for me as a kid and still has today.

In the story the theme of skiing is very prominent. Does skiing have a special significance to you?

I grew up in Russia, skiing is what you do in winter, and the winter is nine months out of the year. I’ve been a skier all though my childhood, both cross-country and downhill. It’s really the only sport I’m good at. When you run through the snow, you compete not against other skiers but against the elements that are so much greater than you, and that is very exciting.

What is the story behind wyssuns?

The word wyssun has origins in the Russian language, having to do with the verb “to poke out” and a couple of other verbs that are not so innocent. The word is perfect for a sneaky, fussy monster; it even sounds like a little monster hissing. I started using this word in the late 80s, and for years in was an in-joke between me and my friends in Moscow. Another friend introduced it to her circle in St. Petersburg. Decades later, I’ve been hearing retellings of those same jokes by the kids in other towns, so the wyssuns now have a life of their own.

The book is rich with amazing portraits of Anna and the creatures of the Wyssun World. Can you share more about the artist, and how these stunning illustrations came to be?

I was lucky to develop a relationship with a uniquely talented artist, Marina Botyleva. She’d just graduated from a prestigious art academy, and was rapidly gaining a cult status among her peers. She liked my story. Marina used the dolls that I designed to embody the characters as a starting point, and let her imagination soar. Without her gorgeous watercolors this project wouldn’t have been the same.

Your first language is Russian, yet you wrote Print In The Snow in English. Did you put any linguistic Easter Eggs that only a Russian speaker would understand?

Funny you should ask! The very early draft of this story, which was quite different from the final book, was written in Russian after the elaborate game between me and my dear friend Irina Maslova when were university freshmen, skiing in the Sokolniki Park in Moscow. It was filled to the brim with pop culture references, wordplay and quotes from the beloved Russian rock band Akvarium. Understandably, most of those in-jokes and puns didn’t translate into English at all, so they didn’t make it into the final story. But there are a few lines that an Akvarium fan might find curiously familiar.

What are your influences for this book?

I am hugely indebted to Jim Henson’s Labyrinth as a great source of inspiration for a classical heroine’s journey. The story of a young person’s quest through a world of monsters is as timeless as storytelling itself; each of us only tells their own version. Of course, David Bowie’s unforgettable Jareth the Goblin King is echoed in the character of the archetypal charismatic villain Lord Yaret.

What are your future plans for these characters?

After I finished the book, I honestly thought I was done with the characters. But then, one winter, I was down with a high fever, and had a vivid dream in which I clearly saw the story of Anna as a young adult, and what would happen if the Wyssun World caught up with her. That is how my next novel, Over The Hills Of Green, was born. As I was writing it, the story of Lord Yaret’s origins also started coming to me, and it became the third book of The Green Hills trilogy.